CENSORSHIP AND THE KURDISH CAUSE

"Freedom of speech means that you shall not do something to people either for the views they have, or the views they express, or the words they speak or write."
~ Hugo L. Black, U.S. Supreme Court Justice.

A bunch of Turkish nationalists would like to shut Rastî down, among others. From Facebook, under "Recent News": 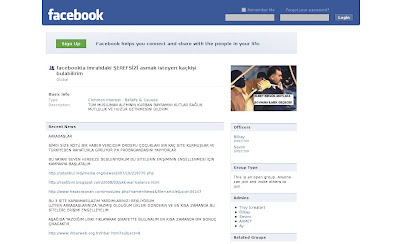 Now I'm going to give you bad news. Those sons of bitches established websites which can be accessed easily in Turkey, and which make PKK propaganda.

I am calling to all people who love this homeland: Let's start a campaign to block access to these websites:


These three websites must be shut down. I'm waiting for your help. Please send the links that I gave to your friends and let's shut down access to these websites.

You can make a complaint by clicking on the link below. In the shortest time, we will have results.

Then a link is given to something called the Informational Technology and Communication Association, Telecommunication Communication Ministry, Information Reporting Center. Let's note that I translated the word "ihbar" as "reporting" in that last part because it makes more sense in English. However, "ihbar" has the meaning of "denunciation" or "informing" as a criminal informant would provide information to authorities . . . of course, they usually do that for money or some other favor.

I have no idea why the morons that make up this particular Facebook group would bother to complain about something I wrote in March. I'd prefer that they complain about something I wrote about more recently, like the post, "LOTS OF TSK DEAD AT BEZELE" or "THE SINS OF THE RULING PARTY". But from way back in March? I mean, the Turkish general staff has already seen all that old stuff. Give them something fresh to get their panties in knots over.

But, leaving these small fry at Facebook aside, let's move on to bigger fish.

A captain from the TSK did a piece for his master's degree work at the US Naval Postgraduate School in 2006, specializing in the question of how to counter so-called "terrorist" training subsystems. It looks like he considers Rastî to be part of that subsystem. Unfortunately, as the captain admits, he can't find any operational training, only "motivational" training:

Content analyses reveal that PKK terrorist network uses the Internet for communicating with its target audience, be it government, its support base or international community. Although this author did not find any operational training material in these sites, they carry out a massive motivational training through the content.

This isn't a very accurate analysis, however; the Ankara regime itself is the greatest "motivational" trainer for anyone thinking about going to the mountains. The captain does promote the idea of using social network analysis to figure out just what the hell is going on with Kurdish websites. He includes a number of tables and graphs that illustrate the results of all his statistical analysis. In conclusion:

Social network analyses techniques can be used to map the Internet-based infrastructure of terrorist systems. Social network analysis helps to identify the central sites of terrorist networks. Influential websites should have the first priority in an elimination strategy, because the other sites simply imitate or use these influential websites as their main source. This does not necessarily require an extensive censorship that would create more problems than it solves. A selective elimination strategy that would include the internet users who are interested in the terrorism should be tried. Community policing the internet would enhance the sense of ownership among the responsible internet users. There are some hacker groups who do it now, as individuals. But to be effective these efforts must be coordinated. There has to be a central site where people can go to inform about terrorist content and an implementation group that has the technical expertise to disrupt such systems.

The website network of the terrorist organization PKK is analyzed as a case study and its influential websites are identified using social network analyses tools. The case study demonstrates how a modern terrorist system uses the internet for motivational training of its current and prospected militants and how its presence could be reduced even eliminated using social network analyses. In this case study, there were three steps in the elimination strategy. The first step was to collect data for constructing a dataset of the terrorist websites—and suggested that community policing the internet can enhance the effectiveness of this step. The second step was to map them to determine the overall network structure. The third step was to identify the key websites that could be eliminated. The next steps would be to disrupt these website networks or deny internet users to be able to reach these sites. The future steps in the elimination strategy have technical, social, and political aspects, all of which are different research topics. However it is obvious that we need international collaboration. Terrorist networks publish their websites from almost every country that has web hosting providers. Terrorist networks can move their sites if they are banned in one country. To be effective, the elimination strategy needs to be comprehensive.

This is the kind of thing that's been attempted for some time. Özgür Gündem is constantly harassed and, back in early 2007, KurdishInfo was one of the Kurdish websites that went down for a short time because the US Treasury Department OFAC ordered the domain hosting KurdishInfo (and several other Kurdish sites) shut down.

Then we have the censors at Google (Note: Registration may be required, so use BugMeNot.com:

In March of last year, Nicole Wong, the deputy general counsel of Google, was notified that there had been a precipitous drop in activity on YouTube in Turkey, and that the press was reporting that the Turkish government was blocking access to YouTube for virtually all Turkish Internet users. Apparently unaware that Google owns YouTube, Turkish officials didn’t tell Google about the situation: a Turkish judge had ordered the nation’s telecom providers to block access to the site in response to videos that insulted the founder of modern Turkey, Mustafa Kemal Ataturk, which is a crime under Turkish law. Wong scrambled to figure out which videos provoked the court order and made the first in a series of tense telephone calls to Google’s counsel in London and Turkey, as angry protesters gathered in Istanbul. Eventually, Wong and several colleagues concluded that the video that sparked the controversy was a parody news broadcast that declared, “Today’s news: Kamal Ataturk was gay!” The clip was posted by Greek football fans looking to taunt their Turkish rivals.

Wong and her colleagues asked the Turkish authorities to reconsider their decision, pointing out that the original offending video had already been voluntarily removed by YouTube users. But after the video was taken down, Turkish prosecutors objected to dozens of other YouTube videos that they claimed insulted either Ataturk or “Turkishness.” These clips ranged from Kurdish-militia recruitment videos and Kurdish morality plays to additional videos speculating about the sexual orientation of Ataturk, including one superimposing his image on characters from “Queer Eye for the Straight Guy.” “I remember one night, I was looking at 67 different Turkish videos at home,” Wong told me recently.

After having many of the videos translated into English, Wong and her colleagues set out to determine which ones were, in fact, illegal in Turkey; which violated YouTube’s terms of service prohibiting hate speech but allowing political speech; and which constituted expression that Google and YouTube would try to protect. There was a vigorous internal debate among Wong and her colleagues at the top of Google’s legal pyramid. Andrew McLaughlin, Google’s director of global public policy, took an aggressive civil-libertarian position, arguing that the company should protect as much speech as possible. Kent Walker, Google’s general counsel, took a more pragmatic approach, expressing concern for the safety of the dozen or so employees at Google’s Turkish office. The responsibility for balancing these and other competing concerns about the controversial content fell to Wong, whose colleagues jokingly call her “the Decider,” after George W. Bush’s folksy self-description.

Wong decided that Google, by using a technique called I.P. blocking, would prevent access to videos that clearly violated Turkish law, but only in Turkey. For a time, her solution seemed to satisfy the Turkish judges, who restored YouTube access. But last June, as part of a campaign against threats to symbols of Turkish secularism, a Turkish prosecutor made a sweeping demand: that Google block access to the offending videos throughout the world, to protect the rights and sensitivities of Turks living outside the country. Google refused, arguing that one nation’s government shouldn’t be able to set the limits of speech for Internet users worldwide. Unmoved, the Turkish government today continues to block access to YouTube in Turkey.

That explains why Google is such a frequent visitor to Rastî. It also explains why it is impossible to link to www.kurdish-info.net, www.firatnews.com, www.gerila.tv, www.hpg-online.com, www.kongra-gel.org, www.pkk-info.com, and www.sehid.com, through Blogger, which is owned by Google. There are probably a lot of other sites that Google censors as well.

Of course, none of that censorship keeps you from copying-and-pasting. Not yet, anyway.
Posted by Mizgîn at 18:15

These spineless thugs, fascists. The world press is crying over the abuses by Mugabe in Zimbabwe, yet Zimbabwe has less censored internet access than Turkey. I don't know if I can do it anonymously, but I want to make a blog listing all friends of Turkish nationalist extremists, starting with the members of that facebook group. These people should be ashamed of themselves. I won't tolerate this fascist censorship. I want everyone these people work with, are friends with, and associate with, to know that these guys are fascist thugs who support the Kurdish cultural genocide in Turkey. They want to ban our speech because the truth is on our side...
Keep on writing Rasti,
Oswald Veblen

Another comment,
To those who perceive the idea above as draconian and as repressive as the actions of the very type of government action we resent...you're right, it is. That is the whole point. It is time for these supporters of cultural genocide to be on the receiving end of this type of things..That's why I want to make an enormous list of--- Perpetrators of the Kurdish Cultural Genocide. Guess what, once you're on the list you can't get off, you can't know why you were put on the list, and the people who control the list don't answer to you...

What you say is right, these bastards just cant handle the truth.