Heaven
I'm in heaven
And my heart beats
So that I can hardly speak
And I seem to find
That happiness I seek
"Cheek to Cheek"
Why the angst? Why the agony? Why the shock and turmoil and foreboding?

Of course I'm talking about the news of the PKK attacks that have left a reported 24 TSK types dead. Others report 26 dead and some 20 wounded.

I'll let you in on something, though . . . friends in Hakkâri say that the death tally is quite a bit higher. Not surprising since the Ankara regime historically distorts the numbers, usually deflating it's KIAs and inflating PKK KIAs.

HPG itself reports that there were approximately 100 kills and wounded from this operation and that this number includes TSK personnel and Özel Harekât (police) team members. Five comrades lost their lives in the operation and HPG will publish the details of those comrades as soon as it is able.

Firat News has reported that a survivor of the Çukurca operation had called his mother and told her that there were many more deaths than Turkish media had reported. The mother, in turn, reported this information via telephone to Kanal 7 TV (Istanbul).

But let's get back to my original questions. Why the shock and agony? Why the promises of revenge from Ankara?

Turkey is a country ruled by a religious party. They refer to their dead as martyrs. So why aren't the ultra-fanatic AKP holy men and women rejoicing that paradise is bulging at its borders with more happy martyrs? I mean, this is what they believe, right, so why the long faces and mean words? The AKP should be asses and elbows on the road Kandil to kiss Murat Karayılan's feet for having overseen the creation of more martyrs.

I find the AKP's lack of faith extremely disturbing. They're worse than infidels because at least infidels aren't expected to have the proper belief system. But the holy men of the AKP? They should declare a holiday of national rejoicing at the mere thought of more Turkish martyrs. They should make Apo Prime Minister of Turkey for life!

Gee, Mr. Gül and Mr. Erdoğan, maybe you're not praying hard enough. Maybe your lack of sincerity in your prayers, your lack of good intentions and your sins have driven your faith away? Perhaps you could purify yourselves of your sins by sending your own children to fight the PKK instead of sending only the children of the poor to be ground into blood meal. You'd be following in the steps of Ibrahim, who was more than willing to sacrifice his son to show his rock-solid faith.

Somehow, I don't think that's going to happen, though. These religious hypocrites are just way too cowardly to put their own kids on the line for their ideology.

On the other hand, maybe the faithless Erdoğan could take some advice from The Baltimore Sun:

But while Erdogan has become a hero for millions of Muslims abroad by urging Arab leaders to embrace freedom and democracy and by championing Palestinian rights, Turkey's Kurds say Erdogan should first focus on problems at home.

But we've waited over thirty years for the Ankara regime to allow anything like an Arab spring in The Southeast so it's time for the wait to end. It's time for the Kurdish people to create their own Kurdish spring. In fact, since the Ankara regime has placed military and police checkpoints at every meter of the political road in Turkey, there is no other choice but serhildan.

BDP is also falling into the trap of faithlessness. There's absolutely no need to apologize for sending worthy souls to paradise.

As for the hyenas of the international community and their absurd cries of solidarity with the infidel AKP, they want Turkey to continue to act for them in Syria and, ultimately, in Iran. After all, so much of the bombing has been cut back in Libya that the hyenas need to smell fresh blood. And Syria's convenient, too, what with İncirlik in the neighborhood.

In the meantime, I think I'm going to sit back and continue to enjoy a little schadenfreude. 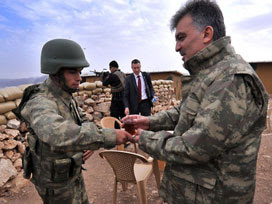