SOLIDARITY WITH THE TAMILS

"After Sri Lanka survived English imperialism, the Tamils demanded freedom. There has been a Tamil people's continuous armed struggle for a period of almost 26 years."
~ Zübayir Aydar, KONGRA-GEL Chairman.

Kongra Gel Called for An Immediate Ceasefire in Sri Lanka

Kongra Gel chairman Zubeyir Aydar condemned the Sri Lankan state's massacre of the Tamil people and stated that Kongra Gel is with the Tamil people in their freedom struggle. Calling for a bilateral ceasefire, Aydar criticized the silence of the international community.

The Sri Lankan army has been conducting heavy operations against the Tamil people for months. For the Tamil people, the operations that have killed thousands of civilians is called an "attempted genocide". While the violent clashes are ongoing in the north of the island, during the night of Saturday to Sunday [9-10 May], according to Tamil sources more than 2,000 civilians lost their lives.

Kurds, too, are watching closely the massacre against the Tamil people and are conducting solidarity activites. The Kongra Gel chairman, Zubeyir Aydar, said, "After Sri Lanka survived English imperialism, the Tamils demanded freedom. There has been a Tamil people's continuous armed struggle for a period of almost 26 years."

In the north of Sri Lanka, twenty-five percent of the population consists of Tamils (5 million), Hindus, Christians, Muslims, whereas 75% is Buddhist Sinhalese (15 million) people. Tamils are a Hindu people. Tamil Eelam Freedom Tigers (LTTE), the Tamil guerrillas, are conducting an independence struggle for the Tamil people who live in the north and northeast of Sri Lanka. Since 1972, at least 70,000 people lost their lives in the clashes.

In 2002, a ceasefire was declared between Tamils and the Sri Lankan state. However, Sri Lanka, which receives support from India and the US, empowered its army and began attacks against the Tamil people after 2006. The ceasefire was abolished de facto. Sri Lanka's president broke the ceasefire in 2008 and intensified attacks.

The Tamil's Demand Is a Just Demand

Pointing out the hardliner attitude of Sri Lanka's government, Aydar said, "All the calls for peace and ceasefires from LTTE were left without any response. Almost one week ago guerrillas declared a unilateral ceasefire; the army did not acknowledge it and continued to attack."

Stressing that the Sri Lankan army is not obeying any kind of law or international laws of war, Aydar said, "Excessive force is being used, civilians are targeted, hospitals are fired on; these are war crimes. Despite the various numbers, thousands of civilians lost their lives in the last couple of months. In the clashes that took place on Saturday and Sunday, mostly civilians lost their lives. It is mentioned that the numbers exceed thousands; there is a humanitarian tragedy there. The Tamil people's freedom demand is a just demand. The demand for living freely in their own country is a just demand. The Sri Lankan government is in an unjust position. Its attitude is an imperialist approach. It wants to keep the Tamil people under pressure and imperialism."

The Imposition of Official Language
The Sri Lankan state imposed Sinhalese language as the national language in 1956. This exacerbated the Tamil peoples reaction. The imperialist attitude, the imposition of official language, and the assumption of the non-existence of the Tamil people's rights first made severe clashes in 1983, which turned into a civil war.

It Is Getting the Support of the Great States
"In the recent clashes it seems like the Sri Lankan army feels itself powerful. It seems like, in the international arena, they acquired the support of the great states. Using this advantage, it conducts a massacre in front of the world's eyes. It wants to smash a people's hope for freedom. The world is just watching," said Aydar.

The International Community Remains Silent
Criticizing the western counties' silence toward the massacre, Aydar said that some European countries' (France and England) foreign ministers went to Sri Lanka. However, their efforts did not go beyond their statements. Aydar said, "America is silent on this issue." He claimed that the international powers are encouraging Sri Lanka by putting the Tamil independence organization on their "terrorist list".

Aydar stressed that the UN's attempts are insufficient. It's calls do not go beyond the statements, like "We are worried about civilian casualties", "The guerrillas must lay down their arms". In addition, it tries to soothe the consciences by saying, "Weapons must be silenced".

Despite the statements from international human rights organizations about Sri Lanka committing war crimes and that there must be intervention immediately, the international powers do not even move. The UN data, too, reveals the massacre. According to the UN, since the beginning of this year to date, 6,500 civilians lost their lives. However, it is estimated that the real number is much higher.

An International Mechanism Must Be Established

Aydar stated that there are similar ongoing incidents in other parts of the world, and suggested the establishment of a neutral and just mechanism with a lawful foundation that has been formed. Mentioning that fifteen years ago great massacres occurred in Rwanda, that the incidents that occur in Kurdistan are before everyone's eyes, and that there was a humanitarian tragedy in Darfur. Aydar said, "There may not be any oil in Sri Lanka, there may not be any conflict of interest from international powers, however humanity is being hurt there. Humanity is put underfoot. The place to bring up such issues is the UN; however since the UN consists of nations, not peoples, it reacts based on the interests of states. For this reason, this mechanism is insufficient. The international community must improve a mechanism for such issues. This international mechanism must react immediately when a people, a minority, a belief, or any group, is subjected to torture by a state's imposition. This mechanism must be a mechanism for which a lawful foundation has been formed and protects the weak."

Kurds and Tamils Must Be in Solidarity

For the solution of the problem, Aydar primarily called for an immediate ceasefire. He said, "Our wish and call is like the way they have done before, to come back to the table and resolve the problem through dialog."

Here's a video of the concentration camps in which the Sri Lankan government is rounding up the Tamil people, from Britain's Channel 4. Note that having a "democratically-elected government" makes it all okay:

Nick Paton Walsh, the Channel 4 reporter at the end of the segment showing the concentration camp, and his team were expelled from Sri Lanka for this report.

“Who is this? You rang me earlier? Is this Channel 4? You have been accusing my soldiers of raping civilians? Your visa is cancelled, you will be deported. You can report what you like about this country, but from your own country, not from here.”

He certainly sounds like he takes it seriously . . . but not seriously enough to investigate. 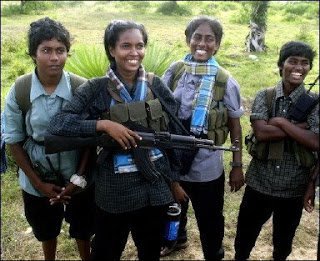 For more background on the LTTE, check a report by one of LTTE's first female Tigers, teaser here:

December 23 1987 was a warm, clear day, and I was hiding under a lantana bush with eight of my comrades in a village north of Jaffna. With our rifles cocked and our cyanide capsules clenched between our teeth, we awaited the soldiers who had been scouring the area for us for several hours. Our orders were to empty our magazines into them before biting into the glass capsules we called 'kuppies' that hung on a thread around our necks. As a Tamil Tiger guerrilla, there was no honour in being caught alive.

For the rest of the story.

I don't think without help and support of the USA would Sri Lanken barbarians killed thousands of civilians.

Like Turkish PM Tansu Chiller and the Turkish general Dogan Gunes said during the hight of the Turkish-Kurdish conflict at 1990s "To kill and catch the fish, we have to drain the sea". This is exactly what Sri Lankan barbarian state did. To defeat the Tamil Freedom Fighters they wiped entire Tamil town from the civilians.

Sri Lankan will be remembered with this genocide against the Tamil people forever even though their state will not be exist for to long.

Where are the massive marches in support of the Tamils like those we saw during the vicious onslaught on Gaza? I thought so...

"Ozal said that 150,000 to 200,000 Kurds should be transferred from the mountains to the west. It was clear they would be given no choice, but he said they should be given good jobs and other incentives. Dams should be built in valleys so that they could not return, he added."