THE FALCONS OF KURDISTAN

"Don't worry. Such things happen. We are doing all that we can."
~ General Gürbüz Kaya, TSK.

The falcons of Kurdistan are tearing the flesh of the wolves of the Turkish Republic. 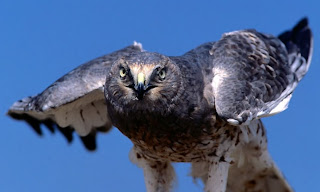 On its website, Teyrêbazên Azadîya Kurdistan (TAK) has claimed responsibility for yesterday's bombing of a military bus in Istanbul. TAK states that the bombing was in retaliation for "an unjust war in Kurdistan" and it also warns TSK about using civilians as shields and warns all civilians to stay away from military areas and vehicles for their own security. It would appear that TAK's intention is to continue its attacks. There's a little more on TAK's statement at Bianet.

The Independent remarks that this bombing marks the end of HPG's ceasefire. However, the end of the ceasefire occurred on 1 June and HPG has no relationship to TAK. If urban operations continue, it may be possible that TAK will operate in some coordinated manner with HPG since TAK has always remained open to such a possibility. At this point, of course, it's too early to tell.

Still, it would be a good idea to avoid Turkey as a travel destination this year.

HPG's policy of active defense has resulted in numerous TSK deaths in the last few weeks. The responsibility for these deaths lies with TSK as the natural result of its recent heavy operations in Turkish-occupied Kurdistan. Heavy TSK losses are also a result of a combination of hubris and incompetence in the Turkish officer corps--a fact that Turkish families are suddenly recognizing.

Not that this would be the first instance of such hubris and incompetence. Remember the Dağlıca (Oremar) commander, Onur Dirik? Well, so does Zaman:

Now the families are blaming the deaths of their beloved this last weekend on the paşa in charge of the garrison in Şemdinli, General Gürbüz Kaya. It would appear that not only is this particular paşa filled with hubris and incompetence, but he's a big, fat liar, too:

Kaya was previously in the press for his remarks in a recorded phone conversation last year after it became evident that mines that killed seven soldiers in an explosion two years ago had been planted by the Turkish military rather than the PKK. The tragic background of the incident was revealed by Van prosecutors who launched an investigation into the mine explosion after a telephone conversation between Brig. Gen. Zeki Es and Maj. Gen. Kaya indicating that the mines were planted by the people who were responsible for the soldiers' security came to light. In the recording, Kaya -- speaking about the blast that killed seven soldiers -- can be heard telling Es: “Don't worry. Such things happen. We are doing all that we can.”

But, then, we know for a fact that Turkish officers don't give a shit. Remember this, from last year:

Four soldiers were killed in the eastern province of Elazığ on Aug. 17 after a lieutenant gave one of the privates a hand grenade whose pin he had pulled out to punish him for sleeping during his night watch, the Taraf daily claimed yesterday.

The testimony of members of the army obtained by the daily reveal that the four soldiers died when an activated grenade given to them by Lt. Mehmet Tümer exploded. According to the records, Tümer wanted to punish Pvt. İbrahim Öztürk for falling asleep during his night watch. It had previously been claimed that the soldiers were killed when a hand grenade carried by one of the soldiers exploded accidentally as they were patrolling the rural area against the prospect of a terrorist attack by the outlawed Kurdistan Workers' Party (PKK). Four other soldiers were injured in the blast. However, soldiers' testimonies point to a totally different cause behind the deaths.

So, this criminally feckless attitude is rife among the officer corps of NATO's second largest army. How appropriate for such a pack of hyenas. Bengi Yıldız is right: "Don't send your children to military service".

On a related matter, Israeli UAV technicians and instructors were recalled to Israel in the first half of June, after the Mavi Marmara incident. CNN reported this:

After the May 31 [Mavi Marmara] incident, Turkey's prime minister ominously warned "nothing would ever be the same again," between the two once-close Middle Eastern allies. Recep Tayyip Erdogan has demanded that Israel apologize for what he has repeatedly labeled an act of "state terrorism" and "piracy" in the eastern Mediterranean.

Turkey withdrew its ambassador from Tel Aviv, Israel, in protest and cancelled joint military exercises with Israel. But Ankara has been careful not to sever ties with the Israeli defense industry.

Further down in that article, İlker Paşa had this to say:

When asked on Monday whether Israeli technicians and engineers had to cut short training on the new drones due to the recent rift in relations, Basbug insisted Turkish operators were adequately prepared to pilot the Herons.

"Now our own personnel, our air force, is using the Heron systems that we bought," Basbug said. "They got the training, it is over. We are capable, we have started using them."

But I think İlker Paşa prevaricates; yesterday, Zaman reported that a Turkish military delegation arrived in Israel on Tuesday to complete some testing on the Heron systems. They'll be there for two weeks.

So much for all of Katil Erdoğan's anti-Israel, pro-Palestinian solidarity shit.

In conclusion, let me express my best wishes to our dear Kurdish falcons and let's all lift a glass to happy hunting!
Posted by Mizgîn at 21:11 89 comments: