"You had to attack civilians, the people, women, children, innocent people, unknown people far removed from any political game. The reason was quite simple: to force the public to turn to the state to ask for greater security."
~ Vincenzo Vinciguerra.

The Kurdish patriots of Hakkari are now being made to pay for their boycott of the phony AKP constitutional referendum with their lives.

Earlier today a dolmuş was blown up by contra-guerrillas in Hakkari province near the village of Geçitli. Ten civilians are dead as a result. This is no different than the Güçlükonak massacre, which was the work of the Turkish military or, more recently, the massacre in Beytüşşebap, Beşağaç, in which 12 people, including village guards, were killed. 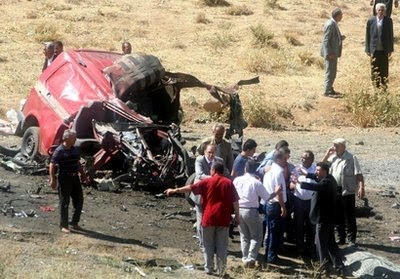 Villagers apparently rushed to the scene of the blast and fought the TSK in order to preserve evidence that was left behind. Shades of Şemdinli! You remember the Şemdinli bombing, in which the citizens of the town chased down and captured the TSK perpetrators and found loads of evidence in the perpetrators' JITEM-registered vehicle.

According to KCK, from Hürriyet:

PKK said the guerilla forces are committed to the unilateral ceasefire, declared on 13 August.

Kurdish boycott campaign against the constitutional referendum was most effective in Hakkari, only 7 percent of the registered voters casted their ballots.

PKK statement said in Peyanus village only 5 voters casted their ballots while 99 percent of the voters supported BDP's boycott campaign and labelled the attack "a response to Peyanus's attitude in the referendum."

"The attack in Hakkari is an attack to all the Kurds" PKK said.

PKK also warned AKP government saying "The people of Hakkari is not alone".

PKK declared the victims as "martyrs of democracy" and paid condolences to the relatives and Kurdish people.

Furthermore, Selahattin Demirtaş had this to say, again from the Hürriyet link:

Later Thursday, BDP leader Selahattin Demirtaş condemned the attack in Hakkari, calling it “inhumane” and saying he believed it was carried out not by the PKK but by the “deep state,” a term used to describe an alleged criminal network within the Turkish state.

The BDP chief said he and other party officials had traveled to Ankara from Diyarbakır to participate in a secret meeting with Deputy Prime Minister Cemil Çiçek on Thursday but the meeting was canceled after the blast, CNNTürk reported him as saying at a press conference.

Demirtaş was also reported as saying the cancellation implied that the government saw the BDP as responsible for the blast.

It may appear to Selahattin Arkadaş that AKP blames BDP for the massacre but the cancellation of negotiations with BDP by AKP clearly indicates something else for me. For me, it indicates that the AKP and The Murderer Erdoğan are behind this contra-guerrilla operation. AKP needed an excuse to not speak to Kurds so it cooked up another massacre, in the finest tradition of the Ankara regime. The AKP ordered this massacre; TSK happily obliged. 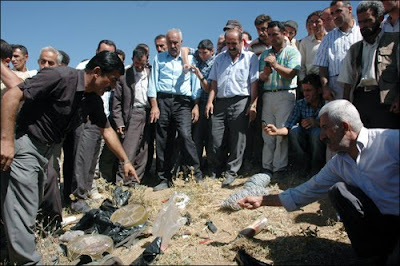 Among the evidence left behind at the scene of the massacre were two military bags with two unexploded anti-tank mines, flares, bayonet, hand grenade, and a Hakkari mountain commando brigade bag containing canned tuna, chocolate, soda, cheese, and bread.

Now this is very, very sloppy. What professional soldier or contra-guerrilla would leave behind such a mess after completing a showy false flag operation? Such a slob should properly be shot. But, of course, this is very interesting in what it tells me and what it should tell others. It tells me that a professional did not do this job. It tells me that TSK ordered korucular, or village guards--non-professionals, in other words--to do this job. Hell, TSK remembers Şemdinli very well. AKP remembers Şemdinli very well, too.

"Two things are infinite: the universe and human stupidity; and I'm not sure about the the universe."
~ Albert Einstein.

One of the crazy Americans who went hiking without a guide last July in South Kurdistan has been released by the Teheran regime:

A jubilant American Sarah Shourd reunited with her mother in Muscat, Oman, on Tuesday after Iranian authorities released her from a Tehran prison where she had been held for 14 months.

Shourd thanked Iranian President Mahmoud Ahmadinejad and Ayatollah Ali Khamanei, Iran's supreme leader, and "everyone who has been a part of making this moment happen for me and for my family."

Shourd, 32, left behind fellow Americans Shane Bauer, 28, who is her fiance, and their friend, Josh Fattal, 28.

The three Americans were detained after they allegedly strayed across an unmarked border into Iran while hiking in Iraq's Kurdistan region. Iran accused the three of spying, a charge the United States and the hikers have denied.

Apparently, the three--who were supposedly journalists--were seized by pasdars as they were hiking in the Khormal region of South Kurdistan near the village of Zalem, according to an article in The Nation dated July of this year.

Aside from the fact that the filthy pasdars, like the filthy TSK, do not respect borders, why were these three hiking around without a guide of some sort? Their behavior was incredibly stupid. Filthy pasdars aside, the region is peppered with numerous land mines. See a map, here.

But we haven't heard too much complaining about how filthy pasdars routinely cross the border to commit all kinds of crimes (see The Nation article), have we? That's fine with me. Since I don't hear anyone bitch when filthy pasdars cross the border to murder, rape, kidnap and bomb Kurds, then I don't want to hear bitching about them kidnapping three Americans.
Posted by Mizgîn at 20:07 1 comment:

THE ANNIVERSARY OF THE COUP, THE REFERENDUM, AND IRONY

"Top Turkish political figures, including former President Kenan Evren, were among the 49,446,369 voters country-wide who went to the polls Sunday to cast their votes in the constitutional referendum. . . . Former President Evren, voting at the Ankara Highways Guesthouse, declined to release a statement."
~ Hürriyet.
The results of the referendum are in, for the most part, and show no big surprises. However, we should extend a big shout out to the bad boys and girls of Hakkari who managed to give both fingers to the fascist AKP by having the lowest turnout rate of all--7% of registered voters!!

Secim.haberler.com shows that a whopping 9% of voters turned out for the AKP constitutional referendum in Hakkari. If you scroll down the page to see Hakkari's results for the March, 2009, local elections, you'll see that 80% of voters voted for DTP (now BDP), so the Hakkari region has become strongly politicized for BDP and against the ruling regime in Ankara. To see that only 7 to 9% of voters in Hakkari bothered to turn out for this utterly worthless referendum should come as no surprise to anyone.

For more regional details of the vote, check this page.

Here's the best photo from the vote, taken, naturally, in Hakkari: 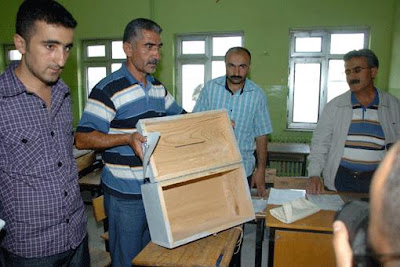 This referendum reached a level of irony only possible in Turkey. Throughout the summer, Katil Erdoğan travelled around Turke, bawling his eyes out about all the victims of the 12 September coup, marketing Kurdish heroes like Musa Anter and Ahmet Kaya to get out the vote in favor of the AKP's carefully selected changes to the paşas' 1982 constitution. This would be the same Katil Erdoğan who's been the süt kardeş of every chief of Turkish general staff since Özkök at the very least. From the time of the Şemdinli bombing, Katil Erdoğan "massaged" Büyükanıt. During the Amed Serhildan, The Murderer gave explicit permission for the same paşas to do what they do best--murder Kurds. No doubt, The Murderer is now also süt kardeş to Işık Koşaner.

Yet, all this summer, this sorry-assed excuse for a prime minister has attempted to play the role of savior of the people. Whoever was convinced of the veracity of The Murderer's act is a flaming idiot.

Another level of irony is that AKP's constitutional changes do absolutely nothing to address the myriad problems of the paşas' constitution. Everyone is still a Turk in Turkey. The legal system still exists to protect the state from the people. The facade of secularism is still maintained.

The fact of the matter is that, even while the memory of the hundreds of thousands of victims of the 12 September coup were invoked, the intention of Katil Erdoğan and his evil AKP minions was merely to gain total control of the constitutional court. Don't believe me? Read it (in .pdf) for yourselves, boys and girls, from the AKP's own website.

Then there is the irony that the referendum vote was held on the anniversary of the 12 September coup. Honestly, you can't plan this kind of coincidence . . . Unless you happen to be Katil Erdoğan.

The final irony was never mentioned. I never heard it once all summer, not from any AKP apparatchik and not through all of The Murderer's crocodile tears. The final irony is that Fethullah Gülen was a huge supporter of Kenan Evren, the CIA's "boy". Let's recall exactly who Evren served:

The U.S. support of this coup was acknowledged by the CIA Ankara station chief Paul Henze. After the government was overthrown, Henze cabled Washington, saying, "our boys [in Ankara] did it." This has created the impression that the USA stood behind the coup. Henze denied this during a June 2003 interview on CNN Türk's Manşet, but two days later [Mehmet Ali] Birand presented an interview with Henze recorded in 1997 in which he basically confirmed Mehmet Ali Birand's story. The US State Department itself announced the coup during the night between 11 and 12 September: the military had phoned the US embassy in Ankara to alert them of the coup an hour in advance.

Two years later, there was another constitutional referendum in Turkey, creating yet another level of irony:

After the coup, in 1982, Kenan Evren was elected the President of Republic of Turkey on November 7 with the 90% approval of the new constitution that was submitted to a controversial referendum, replacing the older constitution which, according to him, had liberties "luxurious" for Turkey.

Nowadays, of course, Evren's biggest supporter has a US green card, accompanied by references from former CIA spooks--George Fidas and Graham Fuller. The irony never ends.

So, what now? The Murderer claims that AKP will write a new constitution after 2012. If so, it's time for BDP to get to work. They should pull out the 1921 constitution, dust it off, update it where necessary, and have it ready to present as an option for a totally new constitution. It's time to reclaim some of those "luxurious" liberties from the shit-eating paşas.
Posted by Mizgîn at 19:43 6 comments: