"Any man can make mistakes, but only an idiot persists in his error."
~ Cicero.

Answering questions from the audience, Tuğluk said, "People have to realise that the 2.5 million votes received by the DTP are by people who sympathise with the PKK. The PKK is not just 5-7,000 people in the Kandil mountains."

You go, girlfriend, you go! I don't think it could be any clearer than that.

Comrade Aysel also spoke about the three possibilities for a solution to the Kurdish situation in The Southeast: 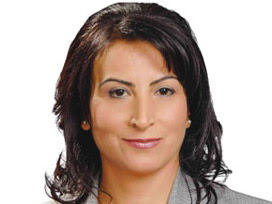 She said that there were three possible paths to take towards a solution of the Kurdish question. The first, leading to a "quick solution", would be for state representatives to speak with imprisoned PKK leader Abdullah Öcalan. She said that Öcalan was influential both "in the organisation and with the people."

The second path would be for the state to define the problem without contacting anyone, but asking international actors to act as mediators. She argued that this was the path being followed at the moment. She warned however, that this process would fail if "the DTP, the PKK and Öcalan are not considered as partners" in the dialogue.

She reiterated the suggestion of current PKK leader Murat Karayılan, who had called for intellectuals to be integrated in the process, arguing that this would stop the process from stalling.

I'm glad she spelled it all out. I don't think there's any need to look for any explanation of what she said or to have it interpreted by someone because it's crystal clear just the way she said it and it's the same thing that's been said for years, anyway.

Of course it's all theoretical at the moment because no concrete steps have been taken by the Ankara regime, which just goes to show that the country is run by a pack of greedy idiots.

Think about how the Middle East would change if Turkey would finally come to its senses and come to a genuine political solution for Kurds. It would dominate the region. Let's imagine that it didn't come up with some half-assed Kurdology department in the universities but implemented mother language education starting from the very first day of a Kurdish child's education that also included Turkish language as a mandatory subject. Those kids would be ready for classes taught exclusively in Turkish language by the time they hit high school, maybe before. Not only would they become fluent in Turkish, they'd be fluent in Kurdish and they would have absorbed the basic knowledge of all other subjects because the foundations of those subjects would have been taught in their mother language.

If such a thing were to happen, Turkey would actually play an important role in the standardization of Kurmanci.

If Turkey were to do these things on top of solving it's most pressing problem, it could feasibly become a magnet for the higher education of Kurds throughout the region and, thus, spread it's influence within the societies of the neighboring countries, and abroad, in a positive way.

But, no, this is just imagination, remember? The reality is that, under the AKP, Turkey remains no better than any other lame-ass, tin-pot totalitarian state. Turkey is the finest example of a group of people who have cut off their noses to spite their faces and the AKP is nothing more than a club for the criminally idiotic.
Posted by Mizgîn at 21:18

"Turkey would dominate the region."

I am sorry but I don't see Turkey surviving as a country even just in my life time never mind them becoming anything anywhere. If such an oppresive, ultra-fascist and religious nationalist state survive another few years then surely that would mean bad for the whole humanity and the world.

I agree with you Hamo but Mizgîn talks about a totally different Turkey, not the present ultra-nationalistic Turkey but a democratic Turkey that would have solved its Kurdo-Turkish problem in accepting an autonomous North-Kurdistan.
I hope it will be soon because if not, Kurds should separate from this undemocratic Turkey in order to create an independant Kurdistan.

True, Elisher. I included a BIG condition in my imaginings.

In reality, Turkey continues to prove that it chooses the way of total stupidity.