"The Ergenekon gang is a deep organization and as long as the true leaders remain free, the real instigators of Dink’s murder will never be captured."
~ Fethiye Çetin, Hrant Dink's lawyer. 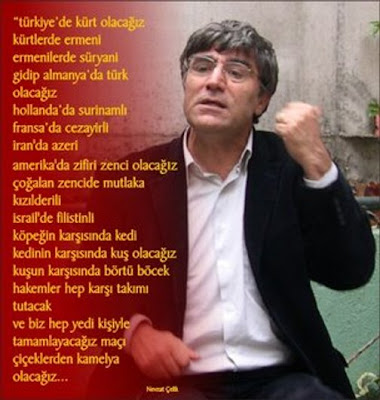 I remember where I was and what I was doing two years ago today. I remember how I felt. I remember opening a page of news and seeing the photo of Hrant Dink covered with paper, yellow crime scene tape holding back onlookers, and the police standing nearby. I remember how I felt. I was shocked, horrified, dismayed, disgusted. I wanted what I was seeing not to be true. But I knew it was true and I didn't have to read the article to know what had happened, who was behind it, and how it would eventually go down.

When I think about all this now, I still have the same feelings I had two years ago today. I remember the photos of Rakel Dink and her family releasing snow-white doves into the air after the funeral of her husband, and I think Hrant Dink was like one of those doves. Peaceful. Good. Innocent.

Turkey recently gave citizenship back to Nazim Hikmet, the communist and Turkey's greatest modern poet who had been disowned by the regime for decades. Ahmet Kaya became the victim of a hate campaign after announcing he would record a song and its video in Kurdish. He made the announcement at an awards dinner, at which he received an award. He was booed and forks and spoons were thrown at his table after making the announcement. Hürriyet published a photo of Kaya in front of a map of Kurdistan and labeled him "honorless". An investigation was started and then put on hold while the authorities waited for Hürriyet to provide them with the original photo of Kaya in front of the Kurdistan map. There was no photo. The photo had been photoshopped by Hürriyet itself. The investigation was dropped.

A Turkish TV documentary on Ahmet Kaya recently commented that he only wanted to sing in Kurdish. Why is that "honorless", especially now that the regime has its own Kurdish-language channel . . . for election purposes? Is the regime attempting to give Kaya's "honor" back?

Can the regime give Hrant Dink's life back?

No, it cannot, but when will we see justice in Dink's case? There have been well over 100 arrests in the Ergenekon case yet in two years' time we still have no convictions for those who were behind Dink's murder. The Istanbul police, the Trabzon police and jandarma, the Samsun police and jandarma, the BBP and other nationalists--everyone who knew beforehand of the plot to murder Hrant Dink--are free, with no concerns, no worries, no threat of justice hanging over their heads.

The three-ring circus which is Ergenekon has not touched the Deep State. The Deep State continues to enjoy its tradition of impunity. Nothing has been learned at all.

Gordon Taylor at The Pasha and the Gypsy has more two years on, here and here.
Posted by Mizgîn at 21:01