THE WAY OF THIS WARRIOR

"A warrior must only take care that his spirit is never broken."
~ Shissai. 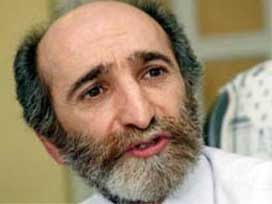 Orhan Doğan was not the kind of warrior who carried an AK-47, but he was a warrior nonetheless, having spent his life in the service of the Kurdish cause, fighting for the dignity of the Kurdish people under Turkish occupation.

From Amnesty International's summary of the DEP parliamentarians' case:

Orhan Dogan was born in 1955 in the Derik district of Mardin province. He is a lawyer by profession - a graduate of Ankara University Law Faculty - but for a time was an official in Ankara's Primary School Education Directorate. After the 1980 military coup he resigned as a state employee and started working as a lawyer in the district of Cizre, Sirnak province.

Orhan Dogan devoted a great deal of time working for the Sirnak branch of the HRA [IHD]. Bomb attacks against his home and workplace in 1989, 1990 and 1991 caused severe damage. In the October 1991 general elections he was elected as a member of parliament for Sirnak.

We know what followed:

At their inauguration as members of parliament in 1991, Leyla Zana and Hatip Dicle made brief statements in Kurdish, and Leyla Zana wore the traditional Kurdish colours of red, yellow and green in her headband. Orhan Dogan and Hatip Dicle wore handkerchiefs in their breast pockets in the same colours. After taking the oath of loyalty in Turkish as required, Leyla Zana added in Kurdish: "I have completed this formality under duress. I shall struggle so that the Kurdish and Turkish peoples may live peacefully together in a democratic framework". These actions provoked pandemonium in the parliamentary chamber. There were cries of "separatist!", "traitor!", "arrest her!" and even "hang her!", and legal proceedings were immediately initiated. Although the deputies were initially protected from prosecution by their parliamentary immunity, in February 1994 Prime Minister Tansu Çiller and the Chief of General Staff began moves which eventually brought about the deputies' trial and conviction.

Leyla Zana, Hatip Dicle, Orhan Dogan and Selim Sadak were never accused of any acts of violence or of advocacy of violence. Indeed most of the statements for which they were convicted contained strong pleas for a peaceful solution to the conflict in southeast Turkey and an end to the bloodshed. The verdict relied heavily on the deputies' public speeches and writings quoted in the indictment -in which the deputies repeatedly assert the Kurdish minority to be a group with a distinct identity but do not advocate violence - as evidence of their membership of the PKK. The acts condemned by the judgment as being evidence of membership of the PKK include: a press statement in connection with the swearing of the parliamentary oath; the "wearing of yellow, green and red accessories" while swearing the oath; a public statement to the United Nations on 2 April 1992 calling for investigation of the killing of civilians during disturbances at the time of Nevruz, the Kurdish new year, of 21 March 1992; and a petition of 20 November 1991 to the Conference on Security and Co-operation in Europe (now the Organization for Security and Co-operation in Europe - OSCE) calling for that organization to appoint a human rights monitoring body to Turkey.

A bloodless battle, that was Orhan Doğan's battle and it is as necessary to the struggle as the legitimate armed resistance outlined in UN Resolution 3103.